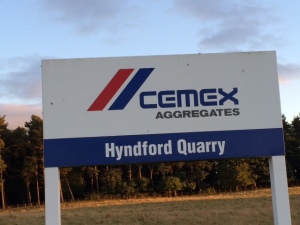 Cemex’s case for extending Hyndford Quarry into the New Lanark World Heritage Buffer Zone by the Falls of Clyde relied on the alleged deficiency in sand and gravel supplies.

On this basis, had South Lanarkshire’s planning policies been respected, the application should never been given the time of day.

The South Lanarkshire Minerals Plan states that Cemex needed to demonstrate that there existed “an over-riding need for the minerals to serve markets of national importance.”

Cemex did not even attempt to do this.

The Mexican multinational was happy to agree that Hyndford’s market “is [only] of regional significance.” [1]

Instead it pointed to a minor deficiency in the 10 year land bank of permitted minerals supplies to serve all markets.

The local authority was happy to go along with this, and approved the application in December 2013.

Much was made of the increasing levels of output from Hyndford Quarry at the Hearing that followed the Scottish Government’s decision to call in the application.

Fortunately, the Scottish Government did not accept this assessment, arguing in its “notice of intention” to reject the main part of the application, that the landbank “is only marginally short.” [5]

A little over a year on from the Hearing, Cemex’s case looks even more absurd.

The lack of any agreed methodology with which to forecast the adequacy of mineral supplies, or to assess whether particular markets are being served, is a severe deficiency in the planning process.

Yet the inability of planning authorities to forecast output from one year to the next with any degree of accuracy is not the only problem.

As Professor Geoffrey Boulton observed in his Expert Witness Statement, assessing whether markets that cut across local authority boundaries are being served adequately on the basis of output from a single local authority “can be very misleading.” [7]

As events have shown, in place of current practice, planners might as well lick their fingers and stick them in the air, and then write down the first number that comes into their heads.

It’s evident that Scotland needs a more robust system of assessing the adequacy of minerals supplies.

Meanwhile, we may safely conclude that Cemex’s case for extending its quarry really was founded on sand.