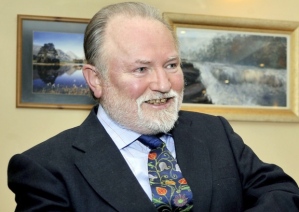 Everyone in Save Our Landscapes was saddened to hear that Arthur Bell has died, aged 68.

Arthur’s life is remembered in this Herald obituary, but I wanted to pay a short personal tribute to him for his role in our campaign to protect the Buffer Zone around the New Lanark World Heritage Site from quarrying.

As chair of the New Lanark Trust Arthur was one of our key supporters.

Afterwards he told me “ Although I expected a good response, it was even better than I’d hoped.” He issued a statement to the Lanark and Carluke Advertiser, which provided its lead story the following week: “Trustees fight quarry threat to New Lanark.”

This turned out to be a little premature for some of his colleagues who thought that they should listen to the other side of the argument before making a final decision and give Cemex a chance to put its case.

Arthur softened the news that “Cemex could have a 15 minute slot” after the next Trustees’ meeting by adding that there would be “nae dinner for them.”

Of course, once the planning application was finally submitted in November 2012, the Trust came out firmly against it. And when the application was called-in by Ministers the Trust joined Save Our Landscapes and other parties to make a united case through the umbrella group, the New Lanark and Falls of Clyde Working Group.

Throughout the campaign Arthur was generous in his advice – on handling the media, fund raising and tactics (“Patience is a virtue.”).

Our exchanges extended beyond quarries and world heritage to topics as diverse as the multi-talented Nobel Peace Prize winner John Boyd Orr (“Popeye to his grandchildren”) and the relative merits of Don Revie’s Leeds and Jock Stein’s Celtic (“Goodness yes! Bremner, Gray x 2, Lorimer. A great team, almost (but not quite) matching the Lisbon Lions.”).

He will be missed.