Everyone in Save Our Landscapes was saddened to hear that Arthur Bell has died, aged 68.

Arthur’s life is remembered in this Herald obituary, but I wanted to pay a short personal tribute to him for his role in our campaign to protect the Buffer Zone around the New Lanark World Heritage Site from quarrying.

As chair of the New Lanark Trust Arthur was one of our key supporters.

Afterwards he told me “ Although I expected a good response, it was even better than I’d hoped.” He issued a statement to the Lanark and Carluke Advertiser, which provided its lead story the following week: “Trustees fight quarry threat to New Lanark.”

This turned out to be a little premature for some of his colleagues who thought that they should listen to the other side of the argument before making a final decision and give Cemex a chance to put its case.

Arthur softened the news that “Cemex could have a 15 minute slot” after the next Trustees’ meeting by adding that there would be “nae dinner for them.”

Of course, once the planning application was finally submitted in November 2012, the Trust came out firmly against it. And when the application was called-in by Ministers the Trust joined Save Our Landscapes and other parties to make a united case through the umbrella group, the New Lanark and Falls of Clyde Working Group.

Throughout the campaign Arthur was generous in his advice – on handling the media, fund raising and tactics (“Patience is a virtue.”).

Our exchanges extended beyond quarries and world heritage to topics as diverse as the multi-talented Nobel Peace Prize winner John Boyd Orr (“Popeye to his grandchildren”) and the relative merits of Don Revie’s Leeds and Jock Stein’s Celtic (“Goodness yes! Bremner, Gray x 2, Lorimer. A great team, almost (but not quite) matching the Lisbon Lions.”).

He will be missed.

On Saturday, more than 100 horse riders took part in a ride out to mark the 875th anniversary of the Royal Burgh of Lanark. Organised by the Lord Cornets Club the event included the replacement of two missing March stones, which, as the local paper reported, were cut by apprentice stonemasons in Lesmahagow.

This was a special occasion for Save Our Landscapes, too.

The ride-out crossed the land that would have been destroyed had Cemex been given permission to extend Hyndford Quarry into the Bonnington parkland – one of the four estates that combines to make the Falls of Clyde Designed Landscape. The riders arrived at Robbiesland from Hyndford Bridge along the Drove Road, with its Parliamentary Wall, through which the quarry was to have passed. Later they followed the route of the tradesmen’s road to Bonnington House, beside Robiesland bog. Both these features would have been removed by the quarry. The riders then galloped towards Bonnington weir, which allowed them to cross the River Clyde just above Bonnington Linn. Much of this spectacular fluvio-glacial landscape would have been under the bulldozer had South Lanarkshire Council’s decision to allow the quarry extension not been challenged successfully. 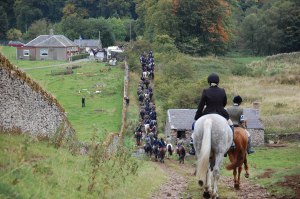 The event served as a reminder of the historic links between Bonnington and Lanark, and in a nice gesture, Lord Cornet Gordon Gray wrote on our Facebook page, “thanks to all your hard work we can hopefully mark our future anniversaries on this truly stunning part of town.”

Scottish Ministers have confirmed that they will reject Cemex’s application to extend Hyndford Quarry into the Buffer Zone of the New Lanark World Heritage Site at the Falls of Clyde.

The application had been approved by South Lanarkshire Council in December 2013, despite more than 11,500 objection letters and opposition from an array of community and heritage organisations, including Save Our Landscapes and the New Lanark Trust.

Ministers called-in the application in January 2014, and it was re-considered by Reporters during a public hearing in August. The Reporters submitted their recommendations to Ministers in February 2015, and Ministers issued their decision on 26th June.

The announcement was made in a brief ‘letter of intent’. This does not constitute the legal decision on the application which has yet to be issued. The decision letter will detail the reasons why Ministers have decided to reject the proposed western extension. Meanwhile, Ministers asked the Reporters to draw up conditions for the approval of the southern extension only. These were subject to representations by the main parties during August.

Whilst Cemex will have the right to challenge the legality of the final decision in the Court of Session, it cannot challenge the decision itself, only the manner by which it has been reached. It is notable that Ministers issued their notification four months after they had received the Reporters’ recommendation. This would suggest that much effort has been devoted to ensuring that the decision is procedurally sound.

Presumably with the Overburns case in mind, some people have suggested that Cemex might submit a second application. (Overburns is the site of another contentious quarry application, where the applicant has indicated that it will submit another application despite the rejection of two previous applications for the same site.)

This is possible but only after two years has elapsed from the pending decision. However, there are very significant differences between the two cases in terms of the circumstances and the planning policies which apply.

It might be recalled that in 2013, Cemex stated ‘We will await the outcome of our planning application and abide by its findings.’ Further, Cemex described the current application as being a ‘one-off opportunity.’

Whilst vigilance is always required, there are good grounds for expecting this to be the end of the matter.

This entry is by Mark Stephens (Chair, Save Our Landscapes), and is based on a letter co-authored by Graham U’ren RTPI (Trustee, New Lanark Trust) which was published in the Lanark Gazette on 29th July 2015. 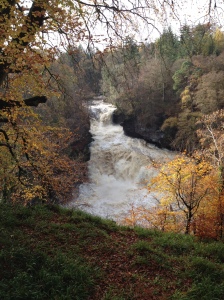 Over the festive holiday period hundreds of visitors to the Falls of Clyde signed letters to Marco Biagi, the newly-appointed Minister for Local Government and Community Empowerment, urging him to reject a proposal to establish a quarry on the site.

They followed the 12,000 visitors who signed letters objecting to the proposed quarry – which would fall within the Buffer Zone of the New Lanark World Heritage Site – when it was under consideration by South Lanarkshire Council. Remarkably, these objectors were drawn from 35 countries, every Parliamentary constituency in Scotland and every ward in 15 adjoining local authorities. The objectors therefore included both international tourists and day-trippers from some of the most deprived communities in Europe. Accepting that the application was contrary to its own policies, the council nonetheless approved it in December 2013.

The wonder is that the application was ever submitted in the first place. The Falls of Clyde form a designed landscape that Historic Scotland described as being ‘intimately bound up with the value of the [New Lanark World Heritage] site.’ The nomination document, signed by Donald Dewar as First Minister, explicitly assured UNESCO that the area was protected from quarrying.

Yet a few years after World Heritage status was secured, the multinational company Cemex – revealed by a Herald investigation to have been fined repeatedly for environmental violations – expressed interest in extracting three million tonnes of sand from the area adjacent to the Falls. Incomprehensibly, Historic Scotland indicated that it had no objection to these plans. Documentation obtained under Freedom of Information demonstrates that the decision was made after only the most cursory analysis.

Having considered Historic Scotland’s response to evidence presented by SOL, UNESCO’s World Heritage Committee formally expressed grave concern about the proposed quarry. At the Hearing, Historic Scotland found itself isolated by a coalition that included, in addition to SOL, the UK Committee of ICOMOS (the body that advises UNESCO), the New Lanark Trust, the Garden History Society, and the Royal Burgh of Lanark Community Council.

This case is undoubtedly an emblematic test of the Scottish Government’s strategy of ‘mainstreaming’ heritage. Its new strategy document, Our Place in Time, maintains that ‘encouraging communities to engage with their historic environment leads to a sense of ownership and empowerment at the local level.’ Scottish Planning Policy now officially recognises the historic environment as being ‘a key cultural and economic asset and a source of inspiration that should be seen as integral to creating successful places.’

These priorities resonate with the flowering of community-led initiatives. SOL’s proposals to enhance access to and understanding of the Falls have been tested through extensive public consultation, which showed that they would attract more visitors and boost the local economy. A Facebook group dedicated to Lost Houses of the Clyde Valley has 800 members, and runs popular site visits. Another group dedicated to establishing interpretation boards throughout the Clyde Valley held its inaugural meeting last week.

For too long heritage has been a treated as an inconvenient impediment to economic growth. Abundant supplies of sand elsewhere in the region mean that there is no trade-off in this case. This only emphasises quite how damaging to public confidence a decision to indulge Cemex would be. The people of Scotland deserve better.

Mark Stephens is Chair of Save Our Landscapes